home » community » News » Recent Market Movements, and What They Could Mean for Your Investments

Recent Market Movements, and What They Could Mean for Your Investments

You’ve probably heard about the recent decline in the US stock market and its flow-on effect to Australian shares. So what does it all mean for your investments and goals?

Recent market movements at a glance

Click here to read CommSec’s detailed analysis of these developments.

By nature, stock markets can be volatile – which means they frequently move up and down. When there’s a fall in the stock market, it’s normal to have some concern about how this might affect your investments. But although a sudden shift in the global economy can flow into the Australian share market in the short term, it doesn’t necessarily mean it will have a negative impact on your returns in the long run.

Since the global financial crisis, there have been many downturns in the share market, as well as in-between periods with strong returns. Because the market moves in cycles, it’s important to remember that it will likely pick up again at some point in the future – even if the immediate outlook seems pessimistic.

The effect on your long term financial objectives

When the market drops, you’re likely to notice a decrease in the returns you earn on your shares and a decline in the value of the shares themselves.

But if we look at the history of share markets, the trend over the long term has always been upward. This means that even if your investments fall in value for a while, you can still expect them to be a successful investment over a period of 10 years or more. That’s why you need to keep sight of the bigger picture – particularly when you have a longer time frame for investing – and focus on how you’re tracking towards achieving your financial objectives.

It’s also important to remember that your exposure to these market events will depend on the make-up of your investment adopted by you and your financial adviser.

Investing for the long term

When the value of your investments decreases, it can be tempting to start selling. But this may not be a wise long-term strategy.

At the moment, any loss in value is only a theoretical one, as you can expect the price of your asset to rise again in the future. But if you sell up now for a price lower than what you initially bought an asset for, then your loss becomes real. What’s more, you risk paying a higher price for your investments when you re-enter the market during an upwards swing.

Talk to your financial adviser

Stock market movements are complicated, and may seem overwhelming to understand, but the important thing is to remain focus on your financial objectives and how you’re tracking towards achieving them. But don’t worry – your financial adviser is on hand to explain how any market changes will affect your personal situation and your long-term financial plan.

If you have any questions or concerns about these developments, please contact McKinley Plowman on 9301 2200. 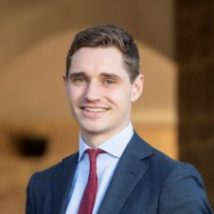 At McKinley Plowman, Will has progressed over the years from our UK Pensions Division all the way through to senior Financial Adviser and now Associate Director within the Wealth team – amassing invaluable experience and knowledge along the way.

Will is a keen cyclist and occasional triathlete that loves going out and socialising with friends.

Will is an Authorised Representative of Fortnum Private Wealth Ltd.